Are you Looking for the Best Female Lawyer for Court Marriage and Female Legal Consultants?

Often times it is noticed that females in Pakistan do not have enough information to secure their legal rights hence they face huge challenges when something weird happens to them especially when it comes to their legal rights. One of the few very important issues is a lack of knowledge regarding their rights at the time of marriage registration regardless of the fact that it is being arranged by the family or it is a court marriage/marriage by their own choice.

On such occasions, many females either do not know where to ask or do not feel comfortable asking questions regarding their rights at the time of marriage registration. Our best female court marriage lawyers have solved this issue for all those females who are in search of a lady court marriage lawyer in Islamabad, Rawalpindi, or Lahore.

How to understand the rights of a female given in the Nikah Nama?

In Islam, the marriage contract, known as the nikah, is a legally binding agreement between a man and a woman in which the rights and responsibilities of each party are defined. The nikah nama is the written document that records the terms of the nikah.

If you are a female who is also not getting enough support from your home to understand this Nikah Nama document at the event of your marriage. Or you are thinking to do the court marriage but want to know what legal rights do you have and how to secure your future on legal grounds.

In Pakistan, the Muslim Family Laws Ordinance, 1961 is the governing law that deals with the structure and registration of a Nikah nama. Nikah Nama is a primary document of a marriage that has 26 different clauses/columns on it. Each column has its own value and importance and none of these columns can be left empty or put a cross on as we generally see in our society.

The rights of a woman in a nikah nama are based on Islamic principles of justice and equality. We have explained each and every single column of Nikahnama on this page.

In Pakistan, court marriages are governed by the relevant personal laws i.e. Muslim Family Laws Ordinance, 1961 for Muslim Couples, the Christians Marriage Act for Christian couples etc. In order to register a court marriage in Pakistan, the following requirements must be met:

Nikah Nama Columns and Explanation of each Column as per the Muslim Family Laws Ordinance, 1961.

Our best lady lawyers have got your back as we are just a step away from you. Our highly skilled and experienced Lady Lawyers can help you in getting married by the way of court marriage. You can also contact our female lawyers with confidence if you just want to understand the marriage registration process and different clauses/sections of a Nikah Nama. 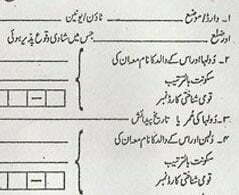 How to Contact a Female Court Marriage Lawyer & other Female Legal Consultants for general questions?

Our team of Lady Lawyers for court marriage is just an email or a call away during the working hours of any normal business day.

Simply go to our contact page to write to us or call us during office hours.