The Complete Guide to Divorce in Pakistan: Everything You Need to Know

Introduction: What is Divorce in Pakistan and How Do I Get One?

What is the Legal Process of Divorce in Pakistan?

We have divided this Guide to Divorce in Pakistan by splitting into three main parts. Marriage in Pakistan can be dissolved by three different methods as explained below…

What is Divorce by Husband?

The detailed process is explained in section 7 of the Muslim Family Laws Ordinance 1961.

By the way off Khula through Family Court

It is a bit time-consuming process to get a divorce by the way of Khula in Pakistan for a female when she does not have a “Delegated right to divorce” in her Nikah Nama and her husband does not want to agree with the divorce.

The process OF Khula begins with the filing of a petition in the family court of the city where the wife presently or permanently resided. Khula Petition must include all relevant information about the marriage, such as date of marriage, residence, children, and any other matters that need to be addressed. Once the petition is filed, the court will then NOTICES to the husband. Generally, Khula petitions may take 2 to 6 months for the announcement of the court’s Khula orders (decree of dissolution of Marriage). After a court order is made, the parties must comply with the terms of the order, including but not limited to the payment of Haq Mehar, and other matters. The process can linger in the court if your selection of a lawyer is bad. So it’s important to seek the help of a qualified lawyer to ensure that your rights are protected throughout.

The 2nd phase of the finalization of Khula starts by filing an application for the issuance of a Divorce Effectiveness Certificate also called a Divorce Registration Certificate to the concerned Union/Arbitration Council for further process. It is 90 days process at the Union Council from the date of filing of the application along with the Khula Decree.

The Mutual Divorce Deed in Pakistan is one of the three types of divorce processes in this country and it can be filed when both spouses mutually agree to end their marriage.

A mutual divorce deed is also called “Talaq-e-Mubarat” or an agreement for dissolution of marriage.

The process starts with drafting an agreement which includes all relevant details about the financial settlement (if any) and other arrangements between both parties and then to be signed by both parties. The agreement will then have to be submitted to the concerned Union Council for further proceedings as per section 7 of the Muslim Family Laws Ordinance, 1961. After laps of these proceedings at Union Council, divorce becomes legally effective and divorce registration certificates are issued to both parties.

Frequently Asked Questions about this Guide to Divorce in Pakistan

What are the steps for getting a divorce in Pakistan?

The divorce process in Pakistan can be divided into two phases.

Phase 1 can be any of the three divorce options mentioned above in this “Guide to Divorce in Pakistan“.

However, phase 2 shall remain the same in all scenarios. Phase two is filling out the divorce application at the concerned Union/Arbitration Council Office, which is a 90 days process. Union Council is the only authority in Pakistan that is capable of issuing of “Divorce Effectiveness Certificate” also called a Divorce Registration Certificate.

What is the procedure for filing for a Khula in Family Courts of Pakistan?

Process of filing Khula in Family Court is not much complicated if you have selected a right lawyer for this job or have ready this Guide to Divorce in Pakistan. Only a best family lawyer can make this emotional and legally troubled ride smooth. Also, your own understanding of some basic and common steps of Khula are important so you can track progress of your khula case. Please see this page if you are interested to read and understand Khula process in Pakistan. We have laid out a separate guide related to Khula procedure in Family court of Pakistan.

How long does it take to get a divorce in Pakistan?

The process of getting a divorce in Pakistan has many steps and it can be different from person to person depending on the option they choose and response of the opposite party if not willing to dissolve marriage.

What are some of the grounds for getting a divorce in Pakistan?

Grounds for divorce in Pakistan are defined by the Muslim Family Law Ordinance of 1961. The ordinance is based on the Shariah law and the Islamic principles.

The grounds for khula vary depending on the mutual relationships of the couples, but most common grounds are adultery, cruelty or desertion by one spouse, imprisonment, insanity or mental illness, conversion from Islam to another faith by one spouse (or from another faith to Islam), and impotence.

How to find a best female divorce and Khula lawyer in Islamabad and Rawalpindi?

Madam Fahmida Naz (Advocate High Court) is one of the best female divorce lawyers in Islamabad and Rawalpindi. She has been practising law for over 18 years, and she has been assisting clients with all their legal needs related to their complex divorce matters.

Her LinkedIn profile can be seen here 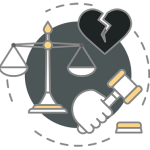 It is important to note that in Pakistan, talaq must be exercised in accordance with the provisions of the Muslim Family Laws Ordinance 1961. It is extemply important to follow the proper procedural steps when serving a divorce notice to avoid any serious legal troubles afterwards.
In conclusion, understanding your rights during a divorce in Pakistan requires a combination of knowledge of Pakistani family law, guidance from a divorce lawyer/attorney, and preparation for divorce deed and relevant legal process of divorce registration. With the right support from our best Divorce Lawyers/Attornys, you can navigate the divorce process with ease and protect your rights.
We hope you like our Guide to Divorce in Pakistan and the steps explained on how to Get Through the Process with as Little Emotional & Financial Damage as Possible.